Describe the current role of forages in US agriculture.

It is difficult to imagine that one half of the land in the US is grassland. Cities and housing developments seem to sprawl out everywhere. But a closer look will show that about 1.2 billion acres (486 million hectares) of US soil is grassland. Much of the land rising up in elevation is covered with grasses and other forages. Although in smaller sections, the area along roadsides and between homes and business complexes are grassy and recreational facilities, parks, and preserves are all grasslands. More than 60% of farms are producing forages. Since we see them every day, grasses are often taken for granted. But visit a third-world country and the difference is obvious. Instead of green, lush growth, a barren and stark horizon appears. Many think of row crops as the main component of American agriculture but most of it is grassland. 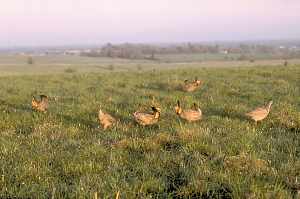 ‹ Describe the role of forages in the history of the US. up Discuss regional forage production. ›