Forage production, the production of feed for domestic animals and wildlife, has been practiced for thousands of years. The tangible benefits to society in the form of meat, milk, and clothing have been enormous. Nevertheless, in recent decades, serious criticism has been leveled at the practice of using large areas of land to produce feed for livestock. The purpose of this section of the lecture is to discuss key issues in this controversy.

As societies have changed, the demand for animal based products has also changed. As a general rule of human development, it appears that as societies become more affluent, there is a greater demand for food, including meat. Statistics from the United Nations Food and Agriculture Organization and the USDA indicate that global meat production (pork, beef, poultry, sheep) has increased about four fold since 1950. The increasing demand for meat has meant that more agricultural land is used to produce animal feed. In the face of global hunger, this practice has been criticized. Simply put, some believe that land used to produce animal feed should instead be used to produce food (e.g. grain crops) suitable for direct human consumption. 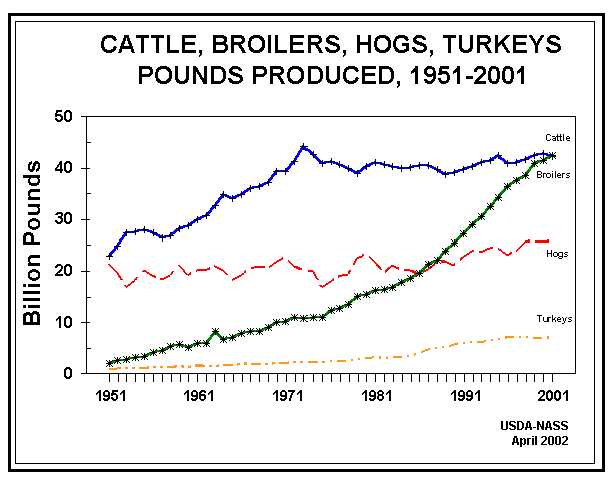 It has been estimated that over 100 million tons of the grain crops produced in the U.S. are fed directly to animals. The feeding of relatively large amounts of grain crops (some grown locally, some imported) to livestock also occurs in other parts of the world including Mexico, Egypt, and Western Europe. Critics of this practice contend that if much of this grain were used for direct human consumption, the result would be a more abundant and healthier diet for hungry people around the world. The practice of feeding grains to animals also comes under criticism because it is considered to be a very inefficient process. Critics note that as much as 95% of the energy in feed grains are used up in the animal metabolism. This leaves only a small portion of the original energy available for human consumption.

As previously noted, the worldwide demand for meat has increased in recent decades and this demand has stimulated higher production of forage crops. Modern agriculture, as practiced in the U.S. and some other countries, often involves separation of forage crop production and animal (meat) production. In this system, forages such as alfalfa hay or corn silage are produced in monocultures with relatively high applications of fertilizers, herbicides, miscellaneous agrichemicals, and sometimes large applications of irrigation water. The harvested feed is transported to relatively large scale animal feeding operations known popularly as feedlots. If farms are viewed as factories, this may be seen as an efficient way to produce forage and meat products. If farms are viewed as ecosystems, this approach to meat production may be seen as an unwise, unsustainable use of valuable natural resources. For example, producing animals away from forage production means that the large quantities of manures produced are not easily available to be recycled onto the land where the forages were produced. In a pasture ecosystem, manure is an important part of nutrient cycling and sustainability of the land. In a feedlot system of production, manure may become a serious environmental problem. Large concentrations of manure may leach significant quantities of nitrates into groundwater supplies. Excessive nitrates in drinking water can be a threat to human health. 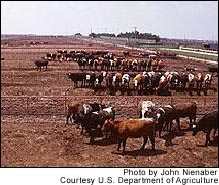 The criticisms noted above are usually answered in several ways. Lands used to produce forage crops are sometimes not suitable for food crop production. For example, rangelands and pastures in the U.S. and around the world are sometimes areas of low water availability and low soil fertility. Such lands are usually not suitable for direct food crop production. Animal products produced on these lands may represent the only practical use of these vast areas, despite the fact that the process of converting forage to meat is a relatively inefficient process. In addition, some point out that food production is a business. Someone must pay for the grain and/or meat produced by farmers and ranchers. While government subsidies, aid programs, and private charities do support agriculture economically, most agricultural income in much of the world ultimately comes from the private consumer or taxpayer. At this point in human history there is a great demand for meat and other animal products by consumers who have the ability to pay for this service. Should the demand for meat decline and the demand for grain (for human consumption) increase more of the grain produced will likely go to direct human consumption.

The controversy over the "best" use of agricultural land continues. Consumer demand for animal products, world hunger trends, and concerns over groundwater contamination from accumulated manures are a few of the major factors that will influence the debate on this issue.