Once the vocabulary for grass identification is mastered, learning about legume morphology is relatively easy because much of the vocabulary is the same or analogous. Legumes, however, are different in form and much easier to differentiate than grasses since there is a wider variety of leaves and inflorescences.

Legumes are dicotyledonous plants with compound, usually trifoliolate (a group of three leaflets) leaves, characterized by pod fruits that dehisce (split) along both sutures (seams). They may be annual, biennial, or perennial. They are important to forage production because of their ability to produce their own nitrogen from dinitrogen gas in the air. They could be considered to make solar-powered nitrogen. Since millions of dollars and millions of gallons of oil and natural gas are used to produce nitrogen fertilizers, legumes are extremely valuable. They are also a high-protein food for both livestock and humans, reduce erosion, and contribute to better soil structure.

Grasses and legumes have several features that are similar. Both have roots (including stolons or rhizomes), stems, leaves, and flowers. But there are many differences to help in identification.

One structure to note that is different between grasses and legumes is the root. Legumes have a main tap root. Alfalfa roots have been known to extend 20 feet (6 meters). Understanding how the taproot stores nutrients for new growth helps forage managers attain the best quality and yield. But realizing that the prominent alfalfa taproot can deplete soil moisture for quite a depth means alfalfa may require irrigation. Not all legumes have deep root systems but roots are often different in grasses and legumes.

Another way in which legumes differ from grasses are nodules. Because legume plants have a symbiotic (mutually beneficial) association with bacteria of the genus Rhizobium, a nodule forms on the roots. The bacteria receives energy and a home while the legume can utilize the dinitrogen gas. The nodules look like small, white dots and attach to the roots.

Legumes do not have the collar region of a grass plant but they have stipules which are located where the leaf attaches to the stem. Stipules can be mistaken for leaves. Many legumes have three leaflets that make up a leaf and the 1 or 2 stipules attached directly to the stem near the junction of the stem and petiole (stem leading to a leaf). Stipules have no current function but are sometimes very helpful for identification. Below is a stipule of red clover. 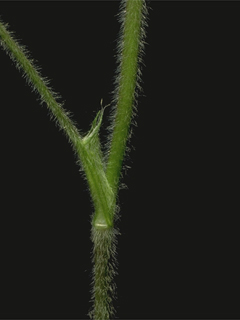 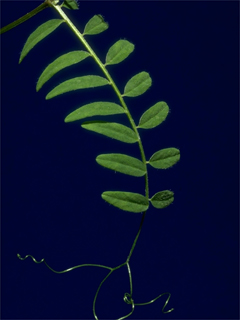 Legume leaves can also be leaflets arranged on alternate sides like those of vetches.

Some legume leaflets have "watermarks", milky colorations that are helpful in identification. 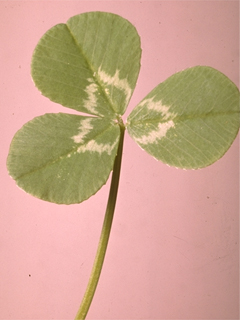 Legume leaves have a wider variety of shapes and are attached differently than grass leaves. Besides the stipules and watermarks sometimes present in legumes, legume leaves do not wrap around the stem as grass leaves do. A petiole (slender stem) connects a legume leaf to the main stem. Since legume leaves are made up of leaflets, the tiny stem connecting the leaflet to a petiole is called a petiolule.

‹ Provide the vocabulary needed to identify grasses. up Identify common species of forage. ›