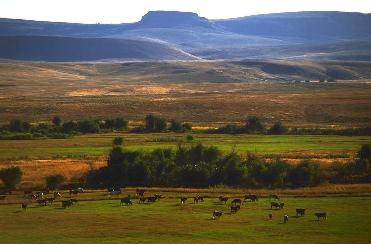 The formation of natural grasslands occurred over millions of years as plants and animals grew, died and decomposed into a soil that was largely undisturbed. The plants provided food and nourishment for animals and the animals, in turn, stimulated growth in the plants, fertilized and distributed seed over the soil. The soil gave nourishment and a safe place for seeds to develop. This process, over a long period of time, created some of the most fertile areas in the world.

The influences of drought and fire are also important. Both sound devastating but they actually provide positive effects to the development of grasslands. The ability of grass to endure through periods of drought; to lie dormant in the soil or grow beneath the soil gives grass its greatest advantage. Fire can kill many plants and animals but this is a natural way to kill pests and weaker plants and replenish the soil with decomposed matter to form better soil. Fire has also been used to extend the boundaries of grasslands by removing trees to allow more grass to grow. Trees do not tolerate fire, drought or grazing as well as grasses.

Other factors that greatly influenced the grasslands came as man tried to conquer these magnificent oceans of grass. Some grasslands were too overwhelming for man for a long time. Their vast acreage, the grasses that grow to be over 10 feet tall, their climate characteristics, and the animals that forage on them have all been natural protectors of the grasslands. But when man has finally been able to conquer the grasslands with the help of inventions, new medicines, better nutrition, and improved transportation, the cycle of give-and-take between soil, plants and animals has been interrupted. The near extinction of the buffalo (bison) from the prairies of North America has greatly altered the life on that grassland area. Without the benefits that the buffalo (bison) gave with their selective grazing, fertilizing with dung and urine, and treading seeds down into the soil, the prairies today are not as they were at the turn of the century. The grasses that seem native to an area today are not necessarily what grew there 100 years ago. The arrival of railroads in the 1800's also greatly changed the massive grasslands in Eurasia and North America. Ranching and farming became much more manageable with railroads to carry goods to market. They also increased the number of people living on the grasslands. Tractors, plows, and other inventions forever changed life on the grasslands. The plant, soil, animal balance is natural but easily upset. The most striking example of how the natural cycle of grasslands can be upset occurred in the early 1900's on the prairies of North America. The "Dust Bowl" was a rude wake-up call that mismanagement can quickly bring destruction to the grassland continuum. Many factors impacted that disaster but better knowledge and management of the plant, soil, animal cycle would have been very valuable.

Today more issues loom over the grasslands. Residential encroachment, desertification, grazing/water rights, plant selection, and suitable land usage all must be considered in properly maintaining the immense value of grasslands.

‹ Locate and describe the temperate grasslands and their forages. up Summary ›