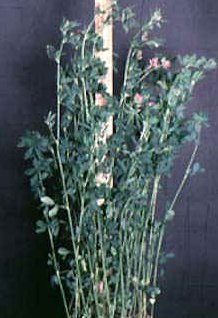 All plants, including forage crops, need relatively large amounts of nitrogen (N) for proper growth and development. Biological nitrogen fixation (BNF) is the term used for a process in which nitrogen gas (N2) from the atmosphere is incorporated into the tissue of certain plants. Only a select group of plants is able to obtain N this way, with the help of soil microorganisms. Among forage plants, the group of plants known as legumes (plants in the botanical family Fabaceae) are well known for being able to obtain N from air N2.

In forage production, this process can be very important because it means that the much needed N can be obtained from three sources: the atmosphere via BNF, the soil, and from fertilizers. Forage producers who find ways to maximize the amount of N obtained from the atmosphere via BNF will be able to reduce their fertilizer costs while maintaining soil fertility, high levels of forage protein, and high yields.

The process by which some forage crops can incorporate N2 from the air into their tissues involves a host plant (also known as the macrosymbiont). For example: alfalfa and a microorganism (also known as the microsymbiont) that is associated with the host plant function in what is called a symbiotic relationship or symbiosis. A symbiotic relationship is one in which two organisms form a mutually beneficial relationship. With most forage crops the second organism is a bacteria that occurs naturally in the soil. The bacteria that is most often involved with forage crops is popularly known as rhizobia, because it is classified as part of the bacterial genus known as Rhizobium.

These soil bacteria infect the roots of the plant and form structures known as nodules. The chemical reactions, that is the process known as BNF, take place in the nodules. 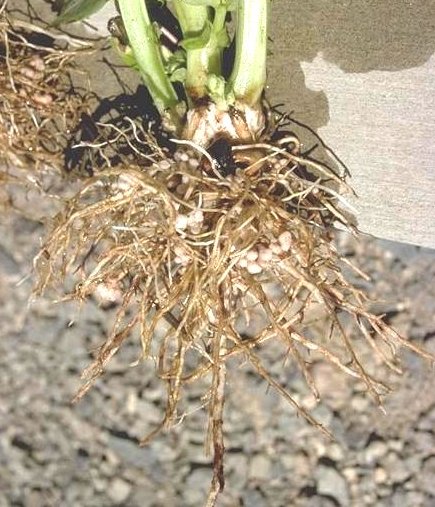 Although the process involves a number of complex biochemical reactions, it may be summarized in a relatively simple way by the following equation:

The equation above indicates that one molecule of nitrogen gas (N2) combines with eight hydrogen ions (also known as protons) (8H+) to form two molecules of ammonia (2NH3) and two molecules of hydrogen gas (2H2). This reaction is conducted by an enzyme known as nitrogenase. The 16 molecules of ATP (ATP = Adenosine Triphosphate, an energy storing compound) represent the energy required for the BNF reaction to take place. In biochemical terms 16 ATP represents a relatively large amount of plant energy. Thus, the process of BNF is 'expensive' to the plant in terms of energy usage. What is the ultimate source of this energy needed for BNF? The sun, via the process of photosynthesis. As ammonia (NH3) is formed it is converted to an amino acid such as glutamine. The Nitrogen in amino acids can be used by the plant to synthesize proteins for its growth and development.

‹ Instructional Objectives up Describe the benefits of BNF in economic and environmental terms. ›