Farmers and ranchers producing food and fiber for society are in a constant battle against living enemies that are able to make the crop unsuitable for human use. These enemies include insect pests, nematodes (microscopic round worms that live in the soil), weeds, diseases, and various animals (e.g. birds). In the 20th century, a large crop protection industry developed. By and large the tool of choice produced by this industry has been agrichemicals. Used properly these chemicals have proven themselves to be powerful tools for defending crops against the previously mentioned enemies. The result has been an abundant, relatively inexpensive food supply that is produced by a small percentage of our population.

Despite the "success" story of agrichemicals, there are a number of serious risks or disadvantages in the use of these materials (see section 6). In addition to the well publicized environmental and health risks, the use of synthetic or manufactured agrichemicals requires large amounts of fossil fuels in both production and application. This dependence on nonrenewable resources works against sustainable forage production. In response to all of the aforementioned concerns, agricultural scientists are developing production systems that require less use of manufactured agrichemicals. The use of a combination of production practices to combat the enemies of crop production with minimal use of agrichemicals has come to be known as Integrated Pest Management or IPM.

In recent decades there has been an increasing use of IPM in the control of crop pests of all kinds. In its broadest sense, IPM is a pest control program that employs an integrated combination of techniques to reduce pest populations to acceptable levels. The techniques used include crop rotation, trap cropping (discussed below), tillage, burning, and biological control (discussed below). In the definition of IPM given above, the term pest has a very broad meaning. It can refer to insect pests, weed pests, disease problems, or even animal pests. The goal of IPM is usually not the eradication of a pest, but instead the reduction of the pest population to a tolerable level. Finally it should be noted that the adoption of IPM does not exclude the use of agrichemicals. It simply means that the use of agrichemicals is minimized or avoided entirely if possible.

How is the concept of IPM applied in making forage production more sustainable? In general, the adoption of an IPM approach to pest control in forages reduces the dependence on fossil fuels and on purchased agrichemicals, both of which are considered nonrenewable resources (see section 2). More specifically the application of IPM techniques to forage production involves the use of techniques such as crop rotation, trap cropping, and biological control of insects.

Rotating crops, planting a sequence of different crops in the same field, helps to disrupt the seasonal growth of weeds and insect pests. This tends to reduce their populations over time. Using legume crops in rotations (see BNF lecture) may also improve soil fertility. Trap cropping is a technique in which a secondary crop that is attractive to insect pests is planted around the main crop in the form of a border. Ideally the insect pests that would normally invade the main crop will remain in the trap crop. At the end of the season the trap crop is destroyed (e.g. plowed under) and the main crop is harvested. Biological control of insects involves using natural enemies of insects (usually other insects) to reduce the population of the pest insect to an acceptable level. Used properly these techniques represent a use of renewable resources, they may help gradually improve soil fertility, and they may increase biodiversity in plants and insects. All three of these properties are characteristics of a sustainable production system. 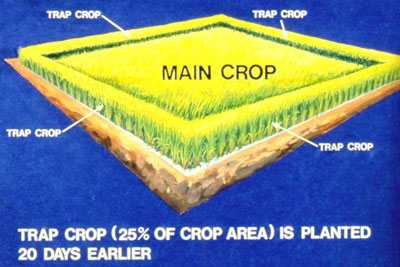 IPM can be an important part of a sustainable forage system. A forage producer should carefully examine a pasture, forage crop, or range area to determine whether or not the degree of pest infestation is serious enough to require human intervention. For example, the presence of some weeds in a pasture may be acceptable. Some weeds may be reasonably nutritious to livestock. As long as a weed is not seriously threatening the main forage crop and is not poisonous to livestock, it may be acceptable to tolerate a certain level of the weed. Similarly, some level of an insect pest may be tolerable as long as it does not pose a health risk to animals or humans. This approach to weed and insect pest control encourages less frequent use of agrichemicals and enhances overall sustainability of the system. By gradually adopting an IPM approach to pest management, farmers and ranchers can produce forages in a more sustainable fashion.