Describe the role of forages in the history of the US.

Forages, made up of mostly grasses and legumes, are the most important plants on earth. Forages are feed or fuel for animals. The domestication and utilization of animals for food, clothing, products, work, and protection has changed the way mankind lives. No longer do we need to spend most of the daylight hours foraging for berries, roots, and edible plants. Forages are the fuel allowing animals to do our work for us which directly leads to more time to think, create, work, and play.

When our forefathers began building the foundation for this nation, they were directly linked to the land for food, clothing, shelter, and protection. We are familiar with some of the agiculture of first settlers, such as that the pilgrims learned about growing corn, a warm-season grass. However, we are not often reminded about how the early Americans used plants and soil for hundreds of daily items. Clothes were made of wool, flax, or hides from animals who had eaten forages. Sod homes were used in certain areas until log homes could be built. Forts, fencing, and other structures were made from plants and timber. Toys, utensils, and books were developed from plant products. It would be interesting to experience one day in the lives of early settlers and find the number of items directly linked to agriculture and animal husbandry. Their link to the land helped them to see how important forages are and they focused on learning how to manage the environment. Early American agriculture was aware of how legumes and grasses could be utilized to build soil, add nitrogen, filter the water, clean the air, reduce losses of nutrients, reduce erosion, and reduce the danger of fires. Legumes were often rotated with crops to rebulild the soil.

During the 1920's and 1930's, many people made a living using an animal. Horses and horse-driven carriages were used for more than transportation. New inventions of various types required an animal fueled by forages. 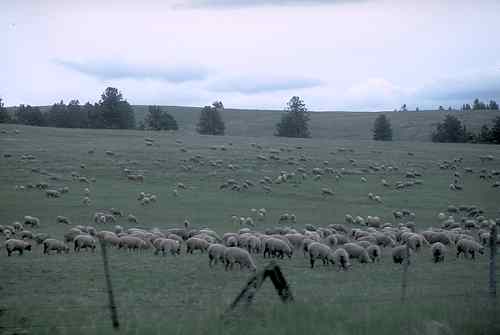 As technology developed, our country prospered and now the US does not use animal-powered vehicles or machines as often. Cultural changes have taken place and we have substituted yogurt for creams, soda for milk, synthetic fabrics for wool, white meat for red, synthetic fertilizers for legumes, and margarine for butter. But these changes are not all for the better and many, including the government, have tried to change the tide of some substitutes. Various farm bills and other legislation has tried to encourage a society that returns something back to nature instead of depleting the many resources. The 1985 Farm Bill encouraged pastures, permanent grass, legume production, forbs, shrubs, and trees instead of crops that take so much from the soil. Unfortunately, society usually only responds when emergencies arise. The gas lines of the 70's were not severe or long lasting, so many ideas about how to better utilize grasses and legumes were not put into practical use. Recycling efforts are improving but still not common.

One half of the land in the US is covered with grasslands. This does not include the crop land which produces more foodstuffs than we need or can econimcally export to other nations. The grasslands should not be turned into crop land but cared for wisely to play their role in sustaining agriculture. Much of grasslands are only harvestable by animals because of the topography, but all the grasslands could be a valuable resource if understood and managed wisely. Historically, Americans have become less and less involved in nurturing the land. We are further and further removed from the real role forages play in agriculture and our society. We do not see clear connections between our food, clothing, shelter, and utensils and the plants of the land because we do not have a part in each step of production. We just like to taste a great steak, wear a warm sweater, heal with the aid of an effective medicine, and play golf on a plush course. We do not often ponder the words of William Cotter Murray: "Grass - putting down its roots four, even six feet into the soil, improving its structure, ventilating it, letting water penetrate it , keeping moisture loss low - held its power and kept the environment from destroying itself." People used to know and understand.

‹ Instructional Objectives up Describe the current role of forages in US agriculture. ›