Locate and describe the tropical grasslands and their forages.

Grasslands near the equator produce plants that can withstand a hot climate through most of the year as well as drought and fires. The savannas of Africa are probably the best known but tropical grasslands are also located in South America, India and Australia. There are llanos in Colombia and Venezuela, campos of the Brazilian highlands, pantanals of Upper Paraguay, plains in Australia and the Deccan Plateau of India. Although all these are hot, their annual rainfall varies. Australian plains may receive only 18 inches (45.72 centimeters) a year but the savannas of Africa receive over 50 inches (127 centimeters). The llanos and pantanal of South America are often flooded during a portion of the year. But rainfall is only one factor in determining whether a grassland is tropical. Solar irradiance, air humidity, and air temperature all add to how quickly moisture is evaporated and these factors have their influence in determining aridity of a tropical grassland. 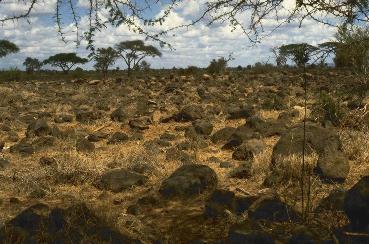 Tropical grasslands are often bordered by deserts, seas, mountains or forests and often have some scattered trees and shrubs. Grasses on savannas are often tall bunchgrasses to aid in surviving the extreme climate in reddish, sandy, dusty soil that has little humus since the long drought periods do not promote the decomposition needed for developing fertile soil. The ability of grasses to lie dormant during periods of drought and other regrowth characteristics, all of which we will study in this course, allow the grasslands to be continually rejuvenated but this rejuvenation occurs in short growing seasons.

Many of the tropical grasslands have been protected from invasion by man by being the habitat of dangerous wildlife and numerous pests. Some grasslands today are still sparsely populated due to tsetse flies. But medicines and other developments have broken down some of the barriers that once naturally kept people at bay. Many people who now rely on the savannas for food are very poor and the soils of the savannas have been so depleted that using the land for crops is unprofitable. Allowing animals to forage on the land is their best way of utilizing the grasses. But poor soil produces little feed and the animals need a lot of land in order to avoid starvation. 100 million families are struggling to produce their food on savannas and watching wild animals forage their lands is extremely difficult and results in important management decisions in India and Africa.

Although it may sound as though life is barely possible in a savanna, animal life is actually teeming. On the savannas of Africa, elephants, zebras, wildebeest, giraffes and other browsers eat the grasses and are then eaten by cheetah, lions and other predators. In Australia, emus and other foragers rely on hot grasslands. But the largest group of animal life in the savannas is made up of insects. Billions of locust, termites and flies abound here. How can so many creatures exist on such a land? Part of the answer lies in the amazing traits of grass which enable it to withstand fire and drought, and in realizing that the various animals and insects eat different plants and perform different functions in the relationship between plant, soil and animal. Zebras eat more fibrous grass while hartebeest will consume the stalks of plants left by previous foragers. Giraffes and elephants crop the trees and carnivorous animals use the tall grasses to hide in preparation for pouncing. Termites turn over tons of soil aerating it so rainfall can seep deeper into the ground. The grasslands are wonderful examples of diversity and synergism.

Beside the natural animal populations, man continues to try to utilize the tropical grasslands as forage for commercial purposes. Although many obstacles have been experienced over the years, such as pests, drought, diseases and transportation, ranchers now raise livestock on the grasslands of India, South America, Australia and Africa. The keys to developing more of the tropical grasslands to feed a growing population are education about forages and proper management.