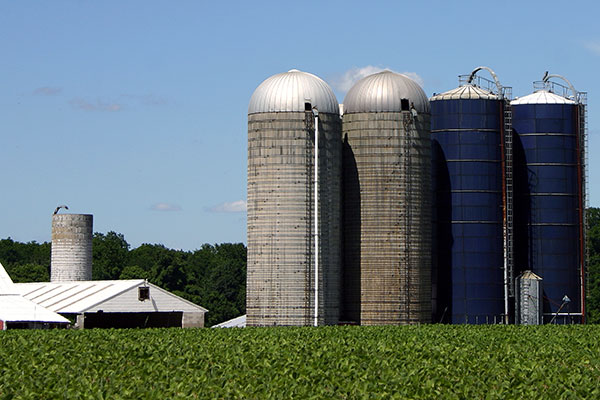 Literally, silage is anything stored in a silo, which may comprise a hole in the ground, a bunker, a tower, a covered heap, or a wrapped bale. The word “silage” derives from the Greek “siros” meaning a pit or a hole sunk in the ground for storing corn (Zea mays L.; McDonald et al., 1991). Missile weapons and dry grain are stored in silos, but neither is described as silage—the term is reserved for the fermented products of agricultural crops.

Woolford (1984) defined silage as “the product formed when grass or other material of sufficiently high moisture content, liable to spoilage by aerobic microorganisms, is stored anaerobically”. Silage is produced by ensilage, that is, the placing of crop material inside a vessel or a structure called a silo. The material may be an entire crop or only part of a crop, such as the grain portion. By placing the material inside a structure the objective is to preserve it and to prevent it from rotting as in a compost heap. The crucial difference between a silo and a compost heap is that air moves relatively freely in the compost heap but not in the silo.

Silage is often compared with hay made from the same crop, and the most obvious differences are in the concentration of water and in the pH (acidity) of the two materials. The ensiling process is potentially as efficient as haymaking with regard to the preservation of the important nutrients in forage crops (see, for example, reviews by Ekern et al., 1975; Demarquilly & Dulphy, 1977; Waldo, 1977; Zimmer, 1977,1980). Haymaking involves the removal of most of the water in the crop so that spoilage microorganisms do not develop during the storage period when the crop is stored in the presence of air and not in a sealed silo. Thus, in reality, hay crops can suffer from significant damage during the period of field drying if weather conditions are not favorable, with loss of leaf and reduced protein content, especially in the case of legume crops like alfalfa (Medicago sativa L.; Thomas et al., 1968; Bolsen, 1985) and a decrease in the digestibility of the organic matter (Demarquilly & Jarrige, 1970; Bolsen et al. 1991). Hay also can deteriorate significantly if exposed to rain or snow during storage, so a covered store or barn usually is provided to protect hay from weather damage.

Silage has several advantages over hay as a mechanically harvested product. Silage has more nutrients preserved per acre because there is less field loss. Silage is also less affected by weather damage because the forage does not lie in the field drying. The ensiling process has become more mechanized and is therefore less labor intensive than haymaking. More crops can be used for silage and silage is better suited as an ingredient in mixed rations for livestock.

However, ensiling forages also has disadvantages. There can be extensive losses in storage if the silage is mismanaged. Spoilage losses also can be substantial if the silage is not fed out quickly enough. The storage facilities for silage are distinct and not as multi-purposeful as barns so initial investment in equipment can be high. And, hay is very transportable, silage is full of water, making it heavy and difficult to move from place to place.

The main objective of ensiling is to conserve the digestible fiber, protein, and energy in the forage, and to maintain the protein in a form that can be utilized efficiently by the ruminant animal. As with haymaking, choosing when to harvest the forage plants directly influences the quality of the forage to be preserved as silage. Higher yields can be reaped when plants mature but quality decreases, so balance the desired yield with harvesting the forage when the plants contain excellent feed value. Knowledge of the specific species and regrowth mechanisms will help managers determine the best time to harvest.

Efficient and rapid harvesting of forage crops must integrate three activities: field chopping, transporting forage to the silo, and filling the silo properly. Good silage relies on timely and uninterrupted movement of the forage from the field to the silo. The forage may be cut with sicklebar or drum mowers and be allowed to wilt in windrows in the field before being picked up. Or a chopper with a windrow pick-up or row crop attachments may cut and collect the forage in one step. Collecting silage includes a cutting or shearing process and it is important that silage is cut to a specified length (6-60 mm, depending on moisture content) for better packing and air extraction in the ensiling process. Moving the cut forage to the silo needs to be done as quickly as possible to retain moisture and purity. Trucks with different loading and unloading attributes should be considered to aid the move. Once the forage is brought to a silo, it must be packed. Front-end loaders, tractors, and blowers are used to pack the forage into silos.

Fresh forage contains about 80% moisture which means that for every 10 pounds (4.5 kilograms) of forage, 8 pounds (3.6 kilograms) are water. Soluble proteins and sugars dissolve in the liquid and become a good home for growing molds, yeasts, and bacteria. Yeasts and molds will degrade the forage in the presence of oxygen. Lactic acid bacteria and clostridia bacteria grow without oxygen. Plant proteases are enzymes which solubilize plant proteins and browning is a chemical reaction resulting from high temperatures. Good ensiling creates an oxygen-free environment to stimulate lactic acid bacteria growth and prevent growth of molds and many yeasts.

Fermentation is accomplished by bacterial growth without oxygen. Lactic acid bacteria use sugars within the plant to produce organic acids which lower the pH from 6.0 to 3.8-5.0, depending on the forage species. Lower pH measurements result in restricted cell growth and enzyme activity. So, ensiling involves preserving forage, excluding oxygen, and reducing the pH quickly through bacterial fermentation. Reducing the moisture content below 40% increases browning which produces heat and could result in fires. A fire can mean a total loss of the forage but any preserving of forage will have some loss. Any handling of the forage (mowing, raking, chopping, baling, storing, unloading) causes some loss in addition to biological losses. Total losses from harvest to feeding are typically 20-30%. Forage managers will wisely learn to keep losses at a minimum by utilizing good management practices. Much of the losses are of high nutritional value since leaves are easily broken.

Knowing what happens inside the silo can help managers make better decisions. There are three main players at work within the silo. Plants are undergoing changes, microbes are busy at work, and chemicals are reacting. Plant processes include initial respiration, cell breakdown (lysis), protein breakdown (proteolysis), and carbohydrate degradation to sugars. Microbial players include yeasts, molds, acetic acid bacteria, and bacilli with lactic acid bacteria and clostridia as the principal anaerobes.

Chemically, there are browning reactions and acid hydrolysis of hemicellulose. Forage crops are best preserved within an oxygen-free (anaerobic) environment with a low pH (5.5-6.0). The oxygen-free environment stops the growth of molds and yeasts, prevents the respiration of plant material, and promotes the growth of lactic acid bacteria. The lactic acid is needed to ferment sugars in the crop which produce lactic, acetic, and other acids. The acids lower the pH which prevents the growth of undesirable anaerobic bacteria and inhibits plant enzymes that break down proteins which is good for maintaining feed value.

The forage inside the silo goes through four stages: pre-seal, active fermentation, stable phase and feedout. Pre-seal describes the filling of the silo when oxygen is available and actively affecting the plants. This is a period of heavy losses in nutritive value of the forage crop. So filling should be done quickly and air should be pushed out with compaction. Once the silo is filled, the remaining oxygen is quickly used up and active fermentation begins. This 1-4 week period sees growth of lactic acid bacteria and the lowering of pH. When the lactic acid bacteria uses all the plant sugars, the stable (infiltration) phase begins. During this phase little biological activity occurs but some oxygen can creep into the silo and cause some yeast, mold, and anerobic bacteria growth. When the silo is opened, at feedout, the silage at the opening is exposed to unlimited oxygen resulting in rapid growth of aerobic microorganisms and a build up of heat. Caution should be taken in opening a silo.

Silage producers have some options available to help the 4-stage ensiling process to proceed successfully. Producers must decide whether to cut the plants and ensile directly into a silo, (direct-cut silage) or allow the forage to dry in the field for a few hours to a day (wilted silage). The moisture content of plants to be ensiled should be about 65%-70%, so producers must find ways to get their crop to that range. If dry matter is less than 30% an undersirable bacteria called clostridia may grow.

The bacteria, found in soil and manure, may be present in the harvested forage. Clostridia is less tolerant of acid conditions than lactic acid bacteria, so lower pH measurements will discourage its growth. When the forage to be ensiled is below 30% dry matter, an additive may be needed to reduce the growth of clostridia. Low dry matter content will also produce effluent (seepage). The effluent or run-off from silage productions can become very toxic since it is a perfect medium for microorganisms but also represents a loss of energy and nutrients. Producers can also choose to add something to the forage to soak up the moisture, such as corn cobs, sunflowers, alfala cubes, or even newspaper. Producers need to balance quality with the possibility of seepage which can be environmentally unwise. Effluent can be collected, removed or drained. It may be spread on fields but may cause scorching to growing plants during hot weather.

Poor ensiling may also result in the growth of Listeria monocytogenes bacteria which can be dangerous to both humans and animals. Listeria growth can be prevented by maintaining anaerobic conditions with good compaction and tight sealing, allowing complete fermentation, ensiling forage with a dry matter content of 30-50%, maintaining a clean storage environmnent, and discarding spoiled silage.