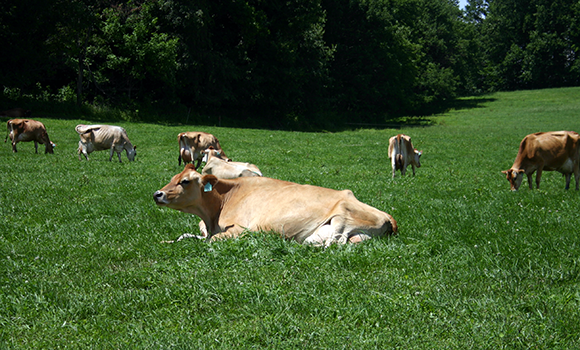 In the U.S. there are six major breeds of dairy cows – Ayrshire, Brown Swiss, Guernsey, Holsteins, Jerseys, and Milking Shorthorn.

A photo and brief description of these six breeds is provided on the https://www.drink-milk.com/breeds-of-dairy-cattle/ site.

The Oregon Ag in the Classroom Dairy Breeds section also provides photos and descriptions of these breeds.

Two common breeds in Oregon are Holstein-Freisen and Jersey:

Oregon is home to just over 200 Grade A dairy farms. These families care for 126,000 dairy cows across the state in 20 of Oregon’s 36 Counties. Dairy cattle contribute nearly $1 billion to the economy every year, with milk production valued at $474 million in gross farm sales, making it one of Oregon’s most valuable commodities.In 2017.

Organic production systems have requirements that all forage and feed provided be produced organically and that no antibiotics be used on milking animals.....