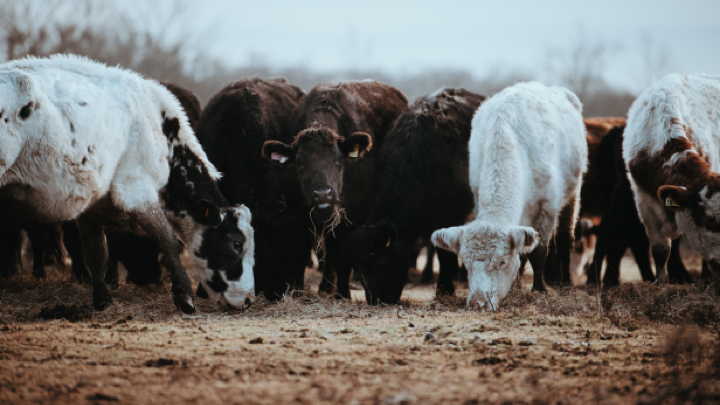 Beef cattle are domesticated bovine farm animals that are raised for their meat.  The British Isles led the world in the development of the principal beef breeds; Herefords, Angus, beef Shorthorns, and Galloways all originated in either England or Scotland. The Hereford, which became the most popular beef breed of the United States, is distinguished by its white face, white flanks and underline, white stockings and tail, and white crest on the neck. Its body color ranges from cherry to mahogany red. It is of medium size, with present-day breeders making successful efforts to increase both its rate of weight gain and mature size, in keeping with the demand for cheaper, leaner beef.

The Polled Hereford is a separate breed of cattle originating from hornless mutations in 1901. It has the same general characteristics as the horned Hereford and has gained substantial favor because of its hornlessness and often faster rate of weight gain.

The Aberdeen Angus breed originated in Scotland from naturally hornless aboriginal cattle native to the counties of Aberdeen and Angus. Solid black, occasionally with a spot of white underneath the rear flanks, the breed is noted for its smoothness, freedom from waste, and high quality of meat.

Additional information on beef cattle breeds information may be found at the following link: https://www.britannica.com/animal/cattle-livestock, the source of the above-presented information.

The cattle industry contributes more than $900 million to Oregon’s economy which makes it the top agricultural commodity. The industry not only provides employment opportunities, but ensures economic viability throughout the state. Although beef producers can be found in the Willamette Valley, the majority of cattle ranches are on the southern and east side of the state in Malheur, Morrow, Harney, Klamath, and Lake counties. In these counties, cattle graze on private and federal rangelands and timberlands, where land is arid and unsuitable for farming practices. Source: https://oregonfresh.net/education/oregon-agriculture-production/oregon%E2%80%99s-cattle-industry/.

Grass-fed cattle are raised the same way as grain-fed cattle, but do not enter a feedlot at the finishing stage. Grass finishing takes longer than grain finishing because of the lower energy content of grasses and legumes compared to concentrate-supplemented rations.

Beef cattle use their tongues to wrap around the forage and pull it between their lower teeth and the upper pad, then swinging its head, and using their lower teeth to sever the grass (and other forage species).  It then grinds the forage and mixes it with saliva before swallowing. The lips, teeth, and jaw of beef cattle make it difficult to get closer than 2 inches from the soil. They eat most efficiently when the forage is 6-8 inches tall. At that height, cattle can graze efficiently. Any time the forage is shorter than 6 inches, they have to work harder for each mouthful of food. And, if allowed to graze lower than 3-4 inches, the grass suffers, since it's regrowth energy is stored in the stem bases and less forage will be produced during the season.