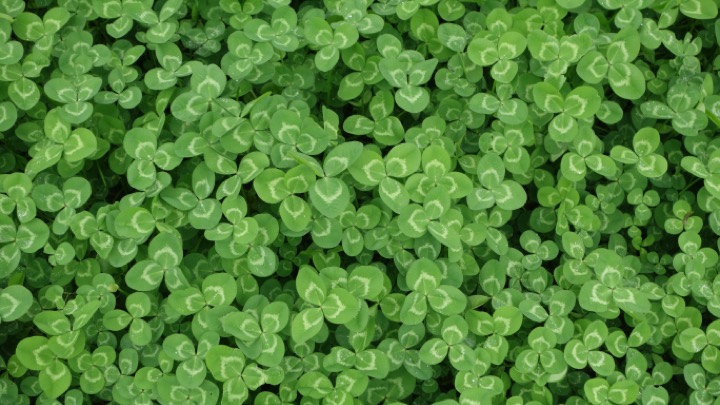 Many species of grasses, legumes, and other forbs can be used as cover and green manure crops, sometimes called living mulches. For quick cover and abundant roots, grasses are a good choice. To increase soil fertility, nitrogen fixing legume species are popular. For reducing nematodes in crop rotations or "flash grazing" applications, brassicai species can be helpful, either alone or in combination with annuali ryegrass.

Annual and perennial grasses used as cover crops include various small grains (barley, oats, rye, triticale, and wheat), annual ryegrass, sorghum-sudangrass, perennial ryegrass, fine fescues, and tall fescue. The grass species most valued for use as cover crops are those that germinate and establish quickly, produce large quantities of fibrous roots and shoots, and are readily removed by tillage or herbicides.

Small Grain Cereals
Small grains are fast to germinate, cold tolerant, and high yielding. They can be planted alone or in combination with annual ryegrass or red clover.

Barley: has the highest salt tolerance of all cereal crops, so is often used for reclamation of saline soils. It tolerates alkalinity, but does not grow well on very acid soils, e.g. below pH 6.0. It does well on well-drained, fertile loams or light, clay soils; is best adapted to loam soils with good drainage; and can tolerate loam to heavy soils. Barley requires a mild winter climate and grows better in dry, cool climates than in hot, moist areas. It is well adapted to high altitudes with cold, short seasons. It has moderate resistance to cold, but winter barleys are less winter hardy than winter wheats, triticale or cereal ryes. Barley seedlings are vigorous and excellent competitors against weeds. Plants have erect culms, growing 60 to 120 cm tall. (Source: http://www.sarep.ucdavis.edu/cgi-bin/ccrop.EXE/show_crop_3).

Oats: grow best in cool, moist climates, yet are adapted to many climatic extremes. Oats are more tolerant of wet soil conditions than barley and require more moisture than the other small grains. Oats are an excellent winter cover crop in the South and in areas where winter freezes are not severe. Winter forms of oat are not as cold hardy as rye, triticale, wheat, or barley. In the Northeast, oats are commonly used as a late-summer-sown cover crop which winterkills, leaving a protective dead mulch that is easily incorporated in the spring. Under moderate fertility and drainage, oats tolerate a wider pH range than wheat or barley and an grow in soils with a pH as low as 4.5. Seeding rate is 60 to 90 lbs/acre, with seeding depth of 1-2 inches. Shallow seeding is possible in areas with high soil moisture. (Source: http://www.sarep.ucdavis.edu/cgi-bin/ccrop.EXE/show_crop_28)

Rye: is the most winter hardy of all small cereal grains and is seldom injured by cold weather. Cereal rye is one of the best cover crops where fertility is low and winter temperatures are extreme. It grows best with ample moisture but does better in low rainfall regions than legumes and it can outyield other cereals on droughty, sandy, infertile soils. Its extensive root system enables it to be the most drought-tolerant cereal crop. Its pH range of best suitability is pH 5.0-7.0, but tolerance is between 4.5 and 8.0. Suggested seeding rates is 60 to 90 lbs/acre and depth of seeding from 0.75 - 1.25 inches. (Source: http://www.sarep.ucdavis.edu/cgi-bin/ccrop.EXE/show_crop_12)

Triticale: was developed by combining rye and wheat genetics. This small grain has good winter hardiness and excellent biomass in early spring (similar to rye) but is shorter in height than rye (more like wheat). Compared to barley where it has been used on hillside vineyards for erosion, the advantages are that triticale is faster growing, colder tolerant, and resistant to barley stripe rust which has decimated many cover crop stands of barley planted in monoculture. (Source: http://www.sarep.ucdavis.edu/ccrop/ccres/1999/6.htm)

Annual Grasses
In mild environments, cool-season annual grasses can be sown in fall or spring. In cold-winter regions, annuals are planted in the spring after danger of hard freeze. Warm-season annuals require soil temperatures above 50F, typically reached in late May or early June.

Annual Ryegrass
In addition to its turf and forage uses, annual ryegrass is the most often used green manure or cover crop for orchards and croplands. It is a good choice for obtaining fast temporary cover on exposed areas with minimal seedbed preparation. (See http://www.sarep.ucdavis.edu/cgi-bin/ccrop.EXE/show_crop_2)

Perennial Grasses
Perennial grass species are most often used in vegetable crop production or orchards or vineyards to reduce soil erosion and facilitate machinery traffic during high soil moisture conditions. Fast germinating species are preferred, although for cropping systems with multiple year production of the primary crop, even slower establishing crops are suitable.

Tall fescue
Tall fescue is slower to establish than perennial ryegrass, but is deeper rooted and longer-lived and stands up to traffic better. Both forage and turf types are available. If livestock will be grazing tall fescue, be sure to select a non-endophyte, forage type.

Annual and short-lived perennial clovers are frequently used alone or in mixes with grasses as cover crops.

Annual Legumes
In mild environments, annual legumes can be sown in fall or spring. In cold-winter regions, annuals are planted in the spring after danger of hard freeze. Winter annuals (like subterranean clover) should be planted in the autumn.

For cover cropping or green manure applications, the most frequently used other forb species are Brassica species, including canola (rapeseed), kale, and raddish. In mild environments, forbs can be sown in fall or spring. In cold-winter regions, forbs are planted in the spring after danger of hard freeze.