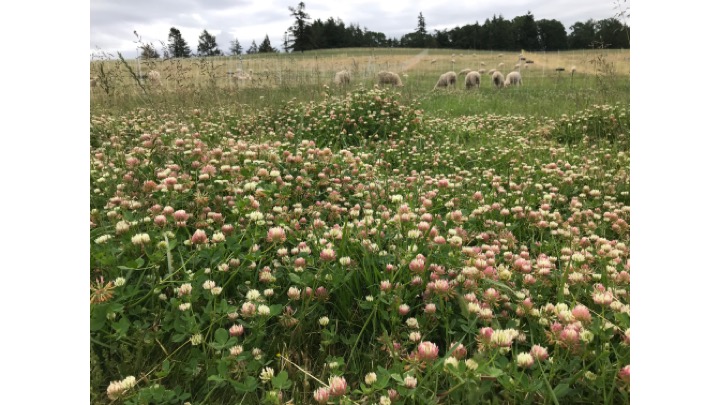 The overall goal is to identify productive and persistent pasture mixtures for improved sheep grazing systems in summer-dry areas of western Oregon.

Specific objectives of the study are to:

Integrating legumes into hill pastures is crucial to improve pasture and lamb production in Western Oregon. It is challenging to identify legumes that persist both under dry conditions in summer and waterlogging conditions during winter and early spring. Pasture yield and spring lamb growth from tall fescue pastures established with birdsfoot trefoil, or subterranean clover, balansa clover, or white clover or a multi-mix pasture containing a combination of these legumes with tall fescue were monitored in 2018. The total annual dry matter (DM) yield of pastures ranged from 7.3 t DM/ha (TF-BFT) to 8.4 (TF-mix) t DM/ha. The DM yield provided by TF-mix, TF-balansa tended to be greater (P=0.08) than TF-BFT and TF-sub clover pastures. The yield difference primarily stemmed from the superior production of TF mix and TF balansa clover in the late spring period. The spring grazing study was conducted for 42 days from 20 April to 1 June. All pasture combinations provided similar lamb liveweight gains in the first half of the spring (0-21 d) but the lambs in TF-balansa and TF-mix pastures grew faster (P<0.05) than those grazed in the other pastures in late spring (21-42 d). While the available pasture mass was similar across groups, the TF-balansa and mixed pastures had higher (P<0.05) legume content (32.4 and 36.9%, respectively) compared to TF-sub (18.3%), white clover (20.3%), and TF-BFT (6.7%) pastures. The second year of the grazing study was conducted in April-July, 2019.  Currently, data from the second year are being analyzed.