Barley is an annual cereal that is often used in semiarid areas because it is more drought resistant than other cereals. Barley has a fibrous root system. The deepest roots are of seminal origin, whereas the upper soil is usually explored by adventitious roots. It has a slightly larger leaf area than other spring grains. Barley does not do well in humid areas where there are many disease problems. Overall, barley is a crop that is best adapted to cooler, drier areas. For best quality feed and good regrowth potential crops should be cut or grazed at 11 to 15 inches (30-40 cm) height. After each cut the crop should be fertilized to ensure good quality regrowth. Barley can be susceptible to crown rust. Risk of disease can be reduced by: sowing resistant varieties, sowing clean treated seed of good vigor, not sowing barley on or adjacent to barley stubble, and not sowing out of season.

Crops grazed or harvested for hay or silage need good nutrition. Nitrogen is important for protein and dry matter yield. Having adequate phosphorus is important for good establishment and even growth.  Potassium is also very important for forage crops as there is large removal of K when the whole plant is taken in comparison to just removing the grain.  To ensure good production a soil test and advise on nutrient needs for the crop is recommended. Top dressing with nitrogen after cutting or grazing will increase quality and quantity of regrowth.

Spring barley has excellent cold tolerance.  Spring types are grown at a higher altitude than any other cereal crop.  Some are grown within the Arctic Circle.
Barley requires a mild winter climate and grows better in dry, cool climates than in hot, moist areas. It is well adapted to high altitudes with cold, short seasons. The species possesses moderate resistance to cold, but winter barley is less winter hardy than winter wheat, triticale or cereal rye. A temperature of 17 F (-8 °C) or lower is required to kill seedlings of barley. Barley is also susceptible to damage by hot, dry weather that occurs during reproduction. Overall, barley grows best under cool, dry conditions, but can withstand hot, dry or cold and wet weather.

Barley is grown over a broader environmental range than any other cereal. In general the species does poorly in hot, humid climates. Barley has very good drought tolerance. It is known for drought tolerance in the western USA & Canada. Barley is grown in arid climates of the Sahara Desert. Barley has good Heat Tolerance, but the heat must be dry heat. Barley does not do well in humid areas where there are many disease problems. Overall, barley is a crop that is best adapted to Cooler, Drier areas.

Few barley cultivars are adapted coast to coast; geographic suitability will vary among cultivars. It is not persistent in the wild, but beardless barley occasionally occurs in grain fields and along roads from Connecticut to New Jersey, in South Dakota, Montana, Colorado, Utah, New Mexico, and Colorado.

Barley grazing management is similar to that of rye.  For best quality feed and good regrowth potential crops should be cut or grazed when they reach 11 to 15 inches (30-40 cm) height. This should be well before the development of awns since they reduce palatability. Young awns are acceptable in hay.  From an autumn planting, 2-3 cuts or grazings are possible. After each cut the crop should be fertilized to ensure good quality regrowth. 'Dictator' is a hooded or awnless cultivar which makes it more flexible in grazing and hay situations.

Barley is mainly self-pollinated. Pollination begins in the middle of the spike & proceeds up and down. It takes 2-3 days for pollination to be completed in a spike. In the field, pollination often occurs before the spike has emerged from the boot (cleistagamous).

The seeding rate range is 53-98 lb/acre (60-110 kg/ha). High seeding rates may be appropriate where rainfall is heavy. Low sowing densities do not necessarily lead to less water use because vegetative growth will be increased. Some barley varieties are susceptible to lodging at high sowing densities, e.g. cv 'Beecher'.

Seeding depth for barley or oat should be no greater than 2 in (5 cm). Shallow seeding is possible in areas with high soil moisture and leads to more rapid emergence and lessened incidence of root rot disease

Barley can be cut for hay/silage, or harvested for grain. It can be plowed in as green manure in spring or grown as a cover crop. It can be grazed lightly in winter or spring. Barley produces abundant biomass quicker than the other cereals and can be used prior to cash crops that are seeded in early spring; it can often be grown where other covercrops cannot. In Central Valley vineyards, it can be matured before vine shoots emerge, thus lessening potential for frost injury. Barley is used for reclamation of saline soils; the main mechanisms of salinity tolerance are salt exclusion and salt dilution

Barley is regarded as a good livestock feed - rate of gain for fattening cattle is slightly less than corn. It can also be plowed in as green manure in spring; its residue breaks down more slowly than that of cereal rye.

Barley has a strong, fibrous root system that aids in erosion control.

Not typically used as a turf species.

There are many barley cultivars. The National Seed Storage Laboratory, U.S. Department of Agriculture, Fort Collins, Colorado, maintains seed for 25,284 landraces, cultivars, and wild species of barley.  Twenty-four cultivars are listed by the Southern Seedsman's Association. Few cultivars are adapted coast to coast. The choice should be based on climatic suitability. The spring or North Africa type of barley is used in California. Cultivated varieties of barley include 6-rowed and 2-rowed types. In two-row types, all kernels are symmetrical, but in 6-row types, 2/3 are twisted, i.e., those from the lateral rows of the spike. The lateral kernels are smaller and weigh 13-20% less. Kernel weight in barley ranges from 5 to 80 mg. Six-row varieties of barley do not necessarily produce low numbers of tillers, but tiller mortality is high when they produce many. Some barley varieties are susceptible to lodging at high sowing densities. 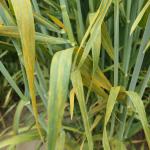 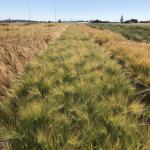 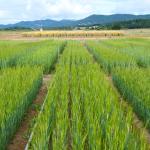 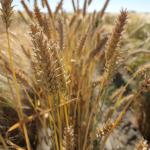 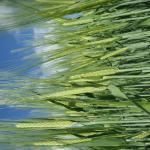 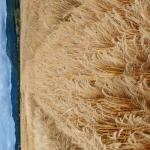 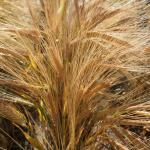 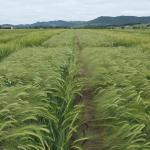